Last night’s Wexner Center screening was a success! Thank you to all who attended, especially those who decided to ride the chartered bus over. I’ve heard for years that many people had a desire to attend but were unable due to transportation issues and wished we provided it like in years past. This year we took a chance and tried it out, and I think it went well. I felt like the teacher on a field trip, taking roll and guiding my students on a fun experience.

The films were fun, but you have to have a taste for the ridiculous to fully enjoy them. The first movie was The Maze, an atmospheric but often ridiculous movie about a couple weeks away from their wedding who parts after he inherits a spooky old estate and has a complete change in personality. The abrupt end of the relationship causes her to go to him to win him back and overcome whatever obstacles he feels are in place, and her desire is understandable thanks to some excellent exposition scenes of them at a nightclub and a pool. The 3D is our to good use in this film, and it makes the movie seem very real and alive; I kept thinking how film truly keeps people who have been dead for decades alive as long as the film exists, supporting the important of restoration and preservation. The plot of this movie hinges on secrecy. If the new Lord has been honest about what was going on at the estate from the beginning, a lot of stress could have been avoided (but then we would have no movie). The unexplained deaths don’t make much sense either but it is a fun ride and the ridiculous reveal gave the audience a good belly laugh.

Gog was in color, but made less effective use of the 3D technology. For most of it I felt I was watching a 2D movie, and the few uses of the 3D felt exploitive rather than useful to moving the plot. It is one of those sci-fi movies that spawned out of the fear of the atomic bomb.
Posted by Maliejandra at 5:51 AM 1 comment:

It's That Time of Year Again!

Cinevent is upon us! In less than a week, I'll be spending days toggling between sitting in a dark screening room and gabbing with people I see once a year.

The Wexner Center at Ohio State does an annual pre-show to kick off the festivities. This year they're screening two 3D features, and unless you're one of the small percentage of people who has a 3D setup at home, this is a rare chance to see these screened. They're showing The Maze and Gog. I've heard Gog is kind of a cheesy sci-fi throwaway flick, but The Maze looks pretty good. The director was William Cameron Menzies whose work in designing the look of classics like Gone With the Wind speak to the potential of this movie. Bob Furmanek has made a name for himself restoring 3D films, and this is his latest completed project. I've met Bob and have a good friend who does freelance work for him, so I imagine this will be a quality effort. Tickets are $8 at the door, or you can purchase a ticket and transportation on the Cinevent website and get shuttled from the Renaissance hotel to the Wexner Center.
https://wexarts.org/film-video/maze-gog

The film schedule is varied as always, and since this is the 50th Anniversary there are tribute screenings to the founders of Cinevent. I'm pregnant this year and it is hard for me to stand for long periods of time so I intend to spend more time in the screening room than normal. However, in the past I've often missed screenings due to talking too much so I anticipate that happening at least once this year.

One of the great things about Cinevent is the massive dealer's room where people from all over the country (and some outside) bring their wares. The room is chock full of original items from the period, DVDs and blu-rays, books, records, etc. There are several book signings scheduled this year, and I intend to take advantage of some of the dealers bringing new releases to sell.

Maltin is the special guest for the weekend, a well-known name among film fans. His annual Movie Guides are a familiar companion even though they have ceased to be printed and his many books on various film topics continue to be seminal works. It was through his commentaries on the Cabin Fever Little Rascals tapes that I first received insight into the behind the scenes of Hollywood at the time, and his book on the subject led me to branch out into the world of the silver screen. This new book promises to be a delight for people like me who feel that Maltin is just a regular guy whose passion mirrors our own, an old friend whose personal recollections are welcome.

Producer Michael Schlesinger will be selling copies of this new DVD set, a series of old-style comedies featuring the comedy team of Biffle and Schooster. I have never seen one of these shorts (due to yapping too much at a convention where one was screened and completely missing it). I see Michael at Cinevent every year and I always feel guilty about missing his film, so I am excited to get to see them finally, both on the screen this year and also at home. 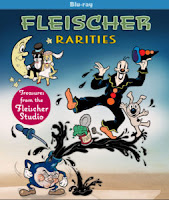 Some people LOVE Disney movies. They've seen all of them, they decorate their purses/cars/selves with the characters, they make yearly pilgrimages to Disney World. When it comes to animation, I am a Fleischer girl. The art is more primitive and quaint and it screams the 1930s. Some of my favorite cartoons from my childhood came from the Fleischer Studios ("Somewhere in Dreamland" and "The Kids in the Shoe"). When I saw that Thunderbean was releasing a new blu-ray featuring rare cartoons from this studio, I immediately contacted company head Steve Stanchfield to see if he would have copies on hand at Cinevent. He will. His company does great work and employs a team who cares deeply about the films they restore.

One of the fun things about the dealer room is you never know what you're going to find. I like to buy books about films, especially autobiographies, and my den is plastered with original posters, several of which I've gotten at Cinevent. This year I was doing some preliminary browsing on ebay and found a dealer who sets up at Cinevent each year selling a poster I've wanted for years, so he's going to bring it to the show for me. Last year I unexpectedly found an insert for Claudia and David, a movie series based on a book series that I absolutely love (which also spawned a great radio series). I had to keep myself from dancing around on the spot so I could haggle!

I hope those of you who have never been to a film festival will consider attending this one. It is a special event that I look forward to each year to recharge my batteries. It is at once relaxing and invigorating and a great place to learn a thing or two.
Posted by Maliejandra at 7:28 AM No comments:

The Columbus Metropolitan Library Main Branch will host a holiday open house on November 30th. Guests can explore the lighted Topiary Park, see the Huntington holiday train in the main lobby, snack on cookies and listen to Christmas carols for free (including parking).
You can register online here.

Sunday, November 6th is the premiere of the new season of the Holiday Baking Championship on the Food Network. If you love baking as much as I do, you'll love seeing these talented and creative bakers make beautiful and delicious treats for the holidays. I always get ideas for new things to try from this show. 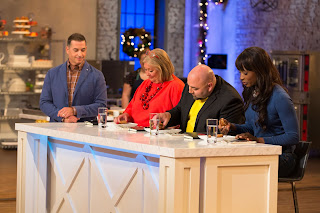 On a sadder note, Kay Starr has died at the age of 94. Starr is known for her country hits, but she is also someone I listen to every year at Christmastime. (Everybody's Waitin' For) The Man With the Bag is one of my favorites, and her version of I've Got My Love to Keep Me Warm is excellent too. 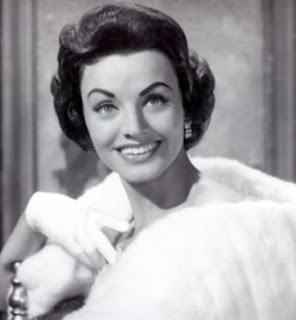 Posted by Maliejandra at 5:59 AM No comments:

Now it is November!

November 18th will begin the official holiday season at Easton Town Center in Columbus, Ohio. The tree will be lit in the evening and the mall will begin offering carriage rides ($10 per person 15 years and up; children ride free with an adult) and photos with Santa.
For more information visit http://eastontowncenter.com/events.

Posted by Maliejandra at 5:16 AM No comments:

This year Christmas will be especially special because I have a baby boy to share it with. There have already been signs around town that it will be here before we know it.

OCTOBER 17th : husband got me a skating pond for my Christmas village

I also bought Isaac several Christmas outfits for this year, including a Santa suit.
Posted by Maliejandra at 6:28 AM No comments: